YEAH, I WOULD LOVE TO DO THAT! 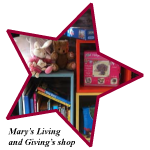 “Well, I think it’s so cool that we are helping other people and it makes me like I do something good every week, which is so important. I don’t just think of myself all the time, I think of other people and I think that’s so important.” Anna’s blue eyes shine brighter and brighter while she speaks, although she is a 15-year-oldyoung girl, in her eyes there is a dramatic serious mature light. The commitment she took is extremely important for her as it makes her feel helpful and proud of the work she does.

Anna W. represents a group of children who are working for Mary’s Living and Giving, a charity which supports Save the Children, which is one of the greatest children charities in the world. This is a project where children who help other children is mutually beneficial. The children of underdeveloped countries, as well as children of those countries which are in a state of war, benefit from the help of privileged children. Whereas, for children, like Anna, who live in socially and economically advanced countries, working “in a volunteer capacity” for a charity “is beneficial for the development of them in perspective.”. Moreover, the children who help others are the first ones who deeply benefit from that: indeed, as Saleem Nujjoo, the shop manager of the Parsons Green store one of the seventeen shops of Mary’s Living and Giving charity, states, “The younger you are when start taking that kind of responsibility, the more capable and more likely you are to make socially responsible choices as an adult.”

A CHALLENGING AND RESPONSIBLE DEVELOPMENT
Anna, as with all her young colleagues, has committed herself to the mission of the charity. Furthermore, once a week she is responsible for many tasks, which includes as she says, “organising the shop, so, organising the clothes, taking the clothes on to the store, stamping, tagging, cleaning like steaming the clothes, filing, all really simple things.” Through her work, she indirectly helps other children, who depend on the amount of money raised by the shop. Of course, she is constantly supervised by the adult members of staff, who, according to the shop manager, give her duties more and more important: “I remember one day a member of staff gave me the keys to give it to the other shop, she gave me this golden job to give the keys to the next door shop and was like, well, they really trust me and I loved that. So cool!” This is a great way of building and strengthening young self-esteem. Moreover, Anna knows that the opportunity of gaining volunteer experience – and other self-development skills – has been given to her by the interrelationship between the Duke of Edinburgh’s Award and Mary’s Living and Giving’s support for Save the Children. Specifically, the Duke of Edinburgh’s Award programme, which is not compulsory, has been designed in order to “inspire, guide and support young people in their self-development and recognise their achievements.” This is a three-level programme of activities by means of which young people, who decide to take part of it, self-develop mind, body and soul “in an environment of social interaction and teamworking.” This links with Mary’s Living and Giving charity, which has been created by the retail consultant and broadcaster Mary Portas who, as Anna emphatically says, “is incredible! I like her!”

Mary Portas, who is loved by the majority of Britons and acclaimed worldwide for her natural inclination for ingenious creativity and her commitment as the Global Retail Ambassador for Save the Children, “made a tv programme about creating a new concept of charity, making charity shop better, and then there was the creation of our shops.”. As a matter of fact, she made “something a lot more engaging with the community, a lot more creative.” Since the areas in which the shops are located are predominantly characterised by middle-class citizens, “we need to put a very pretty shop because if we don’t, the customers around here, they don’t want to come in.” These are the words of Rosanna Dodson, shop manager of Highgate Village store and the brand manager Paul Hunwick, who are proud of managing beautiful stores that could be called fashion shops, given that they are full of remarkable donations. They are not only composed of fascinating high-quality dresses given by prestigious fashion designers like Ralph Lauren and Diane von Furstenberg but also, surprisingly, interior designers have donated their work in name of helping children lives. Literally, they have voluntarily designed the walls, the floors and the ceilings of Mary’s shops. Therefore, the philosophy of the charity comes as a consequence of this, and it can be seen through the words of Rosanna, who mentions that “The philosophy emphasises the community: working with the community, among the community, including the community, it’s fantastic!” Moreover, in order to make it happen, they listen to the local area and organise events – book clubs, meeting circles and children’s playgroups – which the people are interested in. Paul adds “The philosophy (also) is about giving people the chance to put something back and get them to work again. […] they really are social hubs, our shops, and they are really focal points of the community.”

“IT IS A NICE THING TO BE AROUND HERE”
Hence, this is all about working together for a social purpose. Likely, the majority of people who work for the charity and the community who surrounds them would agree with Saleem when he says “One of the real beauties of this environment is everybody wants to help everybody else be the best they can be.” Practically speaking, according to the annual fundraising report of Save the Children, one amazing way in which the money gained from the precious work and support of this community helps Save the Children to rescue kids life is through the purchase of a particular kind of food treatment called Plumpy’Nut. This is a revolutionary nutrient-rich paste, which is compared to a main meal. Of course, the actions and achievements of the international charity are much more numerous.

In terms of human solidarity, it could be interesting and enriching to go to see in person how these actions are implemented. In Anna’s words, “I’d love to see how I help them even in a really small way, I’d love to see from my own eyes what the charity helps with and to see all we do for them, it would be amazing. I think I’d just play and have fun with them, you know, like really be with the children and get down to it, you know? Like actually being with them and be present with them and play with them, talk to them and I’ve just been one of them, you know? Yeah, I’d love to do that!”