FLOWERS, MUSIC AND COLOURFUL SCENARIOS JOYFULLY JOINED ON THE OCCASION OF DIWALI EVENT IN ORDER TO MAKE THE MOST IMPORTANT HINDU CELEBRATION UNFORGETTABLE. 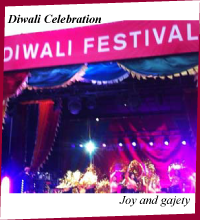 During autumn, Eastern Indians are committed to organising one of the most enjoyable events of their tradition: the Diwali or Deepavali Celebration also called The Festival of Lights, which usually falls between October and November. In fact, this year the event was celebrated Sunday 12th of October to Trafalgar Square.

Traditionally, the main festival of Diwali coincides with the darkest, new moon night between the end of Hindu Lunar month of Ashwin and the beginning of Kartika’s, which has taken place the 23rd of October this year. Before the ceremonial night, people clean and renew their houses and offices, adorning them with Rangoli decorations made by colourful powders and are mostly symbolised by flowers which are drawn on the floors, near the entrance of the houses and walkways. In addition, during the spiritual night women and men wear the finest dresses and the most precious jewels.

All along the event, people pay homage to their numerous deities, their avatars and the avatar’s wives. They are the personifications of The Hindu Trinity, composed of Brahma, Vishnu and Shiva. In fact, the characteristics of the Hinduism, the Indian religion or way of life, include the worship of many gods and goddesses and the belief that when a person or creature dies, their spirit returns to life reincarnated. Furthermore, each avatar has specific properties, for instance Rama, which is considered to be one of the most important incarnations of Vishnu – so significant that it is identified with the Supreme Being by Rama’s devotees – is venerated for his unending compassion, courage and devotion to religious values and duty and for having defeated the demon Ravana. However, the religious connotation of Diwali varies regionally within India, this depends on the school of Hindu philosophy, regional myths, legends and beliefs.
Spiritually, it is the celebration of the victory of Inner Light over darkness, knowledge over ignorance – ignorance that masks one’s true nature – good over evil, right over wrong and hope over despair.
The solemnisation lasts until the next day, the first day of Kartika, in which there is the advent of the Hindu New Year.

According to the Supreme Court of India “Unlike other religions in the World, the Hindu religion does not claim anyone Prophet, it does not worship any one God, it does not believe in any one philosophic concept, it does not follow any one act of religious rites or performances; in fact, it does not satisfy the traditional features of a religion or creed. It is a way of life and nothing more.”

This article has been inspired by the words of Mr Rupesh Bhayani, co-chair of the Diwali in London Committee organising partner with the Mayor of London, who has had the kindness to release this interview.