THE PUBLIC ENJOYS THE SHOW PAYING HOMAGE TO THE NEW LORD MAYOR OF THE CITY OF LONDON, WHO PARADES ALONGSIDE ARMED FORCES, ORCHESTRAL BANDS, LAWYERS, FRUITERERS, AND MUCH MORE. 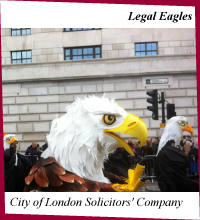 “Look there! That’s the New Lord Mayor, the annually elected ambassador of the City of London!” This was the sentence that jumped out of every mouth when the gilded carriage paraded through the street from Mansion House to the Royal Court of Justice on the Strand, returning via Victoria Embankment. Furthermore, this year falls the 800th anniversary of Magna Charta Libertatum.

Perhaps, not all people know the difference between the Lord Mayor and the Mayor of London: the former is the head of the Square Mile, the historic centre of London officially named as City of London and manages the financial district of the capital, which is the most important nomination of England; whereas, the latter leads the Greater London Authority, which administers the 32 boroughs of London, including the City of London’s.

As usual, the passage of the new Lord Mayor was anticipated by a procession composed of several military orchestral bands riding and marching, a platoon of Waterloo anticipating the bicentenary of the Battle of Waterloo of next year, a boat of mariner’s service of Trinity House, the Royal Marines Reserve, a military fighter aircraf, National Art and Design Saturday Club, which the mission is to inspire the Uk’s next creative generation, Lord Mayor’s Show Band wearing their strange hats, the Legal Eagles from The City of London Solicitors’ Company, representatives of the City Livery Companies, such as Arbitrators, Information Technologists, Water Conservatories, and then Magic Merlin, yellow dog, Robot. In addition, a floating big pink pig and an enormous rib of pork, the Worshipful Company of Fruiterers, and so on. 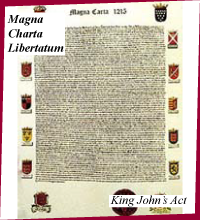 People clapped along all of this and much more, especially when passed the carriage with the Magna Charta, which was issued by King John in 1215 in order to negotiate a peace with a group of rebel Barons, overseen by the Archbishop of Canterbury, it promised the protection of church rights, protection for the barons from illegal imprisonment, access to swift justice and limitations on feudal payments to the Crown. Nowadays, it is considered the first fundamental document for the universal recognition of citizen’s rights. 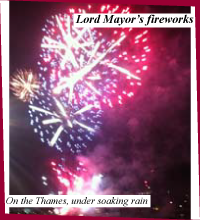 Finally, the Lord Mayor’s day culminated at around 5pm in beautiful fireworks that lit up the dark sky on the Thames with bright and colourful lights, despite the heavy rain which started in unison with the fireworks (!) and literally soaked people.