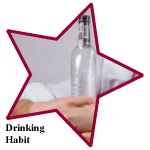 MULTIMEDIA PROJECT ABOUT SOCIAL DRINKING AND ALCOHOL ADDICTION AMONGST YOUNG AND OLD PEOPLE IN THE UK AND ITS IMPACT, COMPARED WITH ITALIAN REALITY.

In this report it will be investigating whether social drinking in the United Kingdom is one of the major causes of alcohol abuse amongst young adults as well as whether older people are more affected by alcohol consumption than the younger generation. Furthermore, the report will be supported by a podcast about the impact of emotions on people’s alcohol behaviour, with contributions from experts and the general public, and an infographic which compares the drinking habits of Britons and Italians. Together, they constitute a multimedia project on social drinking and alcohol addiction. The aim of the project is to investigate alcohol issues and to give an insight into the important role of emotions on people’s drinking habits. The target is an uninformed audience made up of young adults and older people in the 25-50 age range − both females and males with an average general education level.

Young adults are extremely worried by the social implications of drinking to excess: “The cultural rule is to drink and if you don’t drink you have to explain yourself – it is like people are saying ‘What is wrong with you?’” as the study ‘Drinking to belong’ by Seaman and Ikegwuonu reports.

“It’s a British culture to drink, I mean, they’ve been what you called taverns in this country for the last 1,000 years, so, people stopped along the way, they were going from a far distance on a horse and cart or coaches and stopped over to refresh themselves with ale. But gradually it’s evolved into a social environment where people have to drink a lot, that’s the only way they think they can be social with other people,” says Lillian, social drinker.

Indeed, alcohol consumption is very much part of British history “Ale and beer have always formed a part of the staple British diet, the brewing process itself making it a much safer option than drinking the water of the times”, as stated by Historic UK.
Nowadays, however, one of the primary reasons a person drinks too much is to socialise, indeed, the more they drink, the more they feel able to connect happily with people and engage in a conversation. However, this established cultural convention is drastically changing the way young people socialise, especially online. “Young people have to manage their social network profile as well. On Facebook, for example, people put pictures of themselves drinking heavily and being wasted, and receive many ‘Like’, they’re proud of that. But then, because they see pictures of everyone doing that, they think it’s normal, so, they’re going to do it themselves”, says Dr Stuart Linke, Consultant Clinical Psychologist.

In addition, Seaman and Ikegwuonu, during their research, noticed that “Exuberant drinking could provide a sense of group belonging by providing a focus for creating the shared histories that bond people together. The effects produced by alcohol, of creating relaxation and disinhibition, were of clear assistance to socialising. Alcohol had a symbolic importance too, with its presence indicating a change of pace and intentions.”

Therefore, for many young adults, having an alcoholic drink in their hands makes the difference between being accepted as part of the group or being isolated and/or teased, and this often leads to binge drinking. Lillian confirms, “In this culture if you don’t have a drink in your hand it seems odd” she also thinks that people should break this habit. Most people do not even like the taste of alcohol, some others find excuses in order to avoid drinking alcohol, for example, medical reasons.”

Expectancy is the key word: if you think that alcohol gives you liquid courage or that drinking helps you fit in or be more sociable, you are likely to drink more. “For drinkers in general, higher levels of expectancy have been associated higher levels of consumption and for post-treatment problem drinkers, higher levels of expectancy have been associated with higher probabilities of relapse”, as the study ‘Comparing positive and negative alcohol expectancies in male and female social drinkers’ by John McMahon, Barry T Jones and Patrick O’Donnell reports.

Specifically, as the chart of the Office for National Statistics published in 2014 illustrates, although it is the 16-24-year-olds who prefer to binge drink, which means to occasionally drink more than 8/6 (men/women) units of alcohol consumption in a single session, it is the 45-64-year-olds who drink more and constantly. 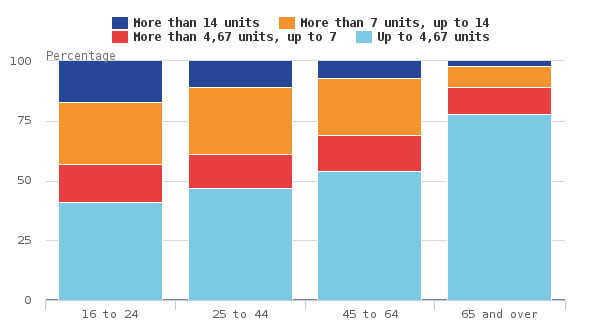 Statistically, alcohol is strongly related to crime, “A fifth (29%) of all violent incidents in 2013–14 took place in or around a pub or club … over two thirds (68%) of violent offences occur in the evening or at night”, Alcohol Concern reveals. Moreover, alcohol use is a feature in the majority of domestic offences and almost half of the offenders are alcohol addicted. Long-term alcohol abuse is closely linked to alcohol addiction: “Of men in England in 2014, harmful, mildly dependent, and probably dependent drinking was most common among 25 to 34 year olds (6.6%). For women, this problem drinking was most frequent among those aged 16 – 24”, reports Drinkaware.

What about the middle-aged? The chart above also shows that people drink more and more over the years. Heavy alcohol consumption, not to mention alcohol addiction, has a strikingly negative impact on the human body, “From the gut to the heart, the blood vessels to the skin, its effects are all pervasive”, says Paul Wallace, emeritus professor of public health at University College London and medical director of the charity Drinkaware. However, when a person crosses the threshold of middle age, the effects of drinking become more and more serious as the body organs become smaller and smaller and alcohol remains in the system, especially in the blood, for longer, ruining brain, skin and liver cells.

Over the years, the older a person becomes, the more a drinking habit becomes a style of life. Indeed, as the Institute of Alcohol Studies declares, “Official statistics on the consumption habits of older people in the UK over recent years indicate that they consume fewer units than younger generations”; however, “older people drink very little, but very often.” Surprisingly, “the monitor (Drinkaware) revealed that 3.4 million middle-aged people are the nation’s hidden drinkers who regularly drink above the lower- risk limits despite many recognising the potential health harms.” Alcohol consumption amongst older people may be hidden through embarrassment or be masked by other concerns − in this way they are less likely to be discovered. However, although they do not get drunk, they are consuming alcohol at levels associated with serious health problems. The research adds “More than half (59%) of middle-aged drinkers said they do not want guidance on how to moderate their intake.”

The implications of constant moderate or heavy drinking are manifold in terms of health and crime. The review of the Department of Public Health England, published in 2016, reports that “amongst those aged 15 to 49 in England, alcohol is now the leading risk factor for ill-health, early mortality and disability and the fifth leading risk factor for ill-health across all age groups.” Nonetheless, alcohol industry policy to reduce public health harms and the implementation of the Public Health Responsibility Deal – a Government scheme – “has often been controversial, due to the ambiguity of some the goals and issues around reporting practices.”

However, there are a number of ways in which people can check whether they are drinking safely or excessively:
• Dr Stuart Linke has developed the Down Your Drink programme, which is an internet-based intervention with the aim of reducing harmful drinking. This is a set of tools “to help you look more closely at your drinking.”
• NHS Drinks Tracker or Off apps, help users to control alcohol levels and feel healthier.
• Social Behaviour Network Therapy for Addictions is a treatment which does not only involve addicts, but also connects them to those family members or friends who are willing to support them.
• Drinkaware free app helps you “track your alcohol consumption and spend over time, calculate units and calories and set goals to help you moderate your drinking in 2017!”
• In addition, Steven M. Melemis’ book ‘I want to change my life’, “will help you identify what you need to change, and give you the coping skills to achieve your goals” by means of a “one-month step-by-step program to get you started.”

In recognition that Britons do drink alcohol in order to feel merrier and more able to socialise with other people with the purpose of enjoying time to the full, and that older people’s drinking habits are more harmful in terms of mental and physical wellness than that of the younger generation, the next step is to explore to what extent social pressure is driven by emotions, listening to the podcast. In addition, it might be interesting to see the infographic which compares the alcohol data between the UK and Italy, a country which is internationally famous for producing prized wines.

Audio production about the link between emotional immaturity and (alcohol) addiction.

Emotions. Human being is driven by them. Emotions exert a powerful influence over our lives, which strongly depend on your ability to deal with both positive and negative feelings. Sometimes people have difficulty to cope with feelings and the easiest way to escape from them is to ‘drown in a bottle’. Of course, this is the extreme end of alcohol abuse, but, how do people feel when they drink and why do they drink?

BRITONS AND ITALIANS: WHO DRINK MORE?

A comparison between the alcohol consumption and addiction of Great Britain and Italy. Specifically, the data show the percentage of the favorite beverages, the alcohol use disorders and the alcohol dependence of each country.