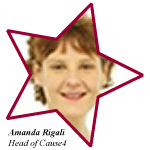 Head of the Arts Fundraising and Philanthropy Programme at Cause4, Trustee of People United, Former Director of Touring of Arts Council

December the 2nd 2014 I was honoured to meet Ms Amanda Rigali into a noisy cafè in Central London on a rainy evening. I chose to interview her as I wanted to ask some questions about the correlation between arts&culture sector funding and the financial crisis and, given that she has considerable knowledge of the topic, the matter was fully addressed. Specifically, my purpose was to outline the economic reality of arts and if it has been affected by the crisis.

BARBARA NICOTRA-Purposely, my first question was about her direct experience, asking if any changes have been in the way in which she manages the Fundraising and Philanthropy Programme.
AMANDA RIGALI-Surprisingly, she answered that “the programme is a direct result of the financial crisis: the government realised that arts could have obtained better funding.” In fact, the programme is supporting arts&culture organisations to get better arts fundraising from other kinds of sources composed of individuals, businesses, and trust foundations.

B.N.-Secondly, this question wanted to widen the previous point, thus, I asked what she experienced in the last 7 years – since the beginning of the crisis until now – in developing arts, sports and educational sectors in the UK and internationally.
A.R.-She underlined that in the Uk “there is a wide support base for the arts” and this implies, I suppose, that internationally little or nothing has changed. Furthermore, there is still a great deal of public funding in the arts and a huge number of opportunities for arts&culture organisations: they have got better at earning money from individuals and businesses, several organisations have even donors.

B.N.-Worldwide, the arts&culture sector has two ways in which it can be administered, indeed, it can be arts-driven or market-driven. I wondered which is the most used in the Uk.
A.R.-Proficiently, she told me in England they are not different as arts organisations are businesses, that is, they earn over half of their turnover, not to mention the support they receive from national or local government and the private income from individuals or businesses. Hence, arts charities have mixed economy, therefore, they have to be always market-driven. In addition, she said this is good since the key point of being an arts organisation is that “the arts management does not give the public what it wants but anticipate what it might want in the future” and, in order to achieve this goal, the arts organisers have to interact with people.

B.N-At election time, it is interesting to know whether arts management is planning to make a case to the government.
A.R.-As a matter of fact, she confirmed “arts is trying very hard to make a strong case to government” in multiple ways: in terms of the essential value of the arts in our society but also in instrumental ways through its impact on education, health and wellbeing and economic cultural tourism. Arts managers learnt from the Olympics Games in 2012 that the art was an economic generator as well as in the case of Glasgow Commonwealth Games, and other big events such as the Festivals of Edinburg and Manchester, and so on. On these occasions, people came and paid to see big spectacular entertainments.

B.N.-Keeping on asking, given that she worked for the Arts Council, I wanted to know the most important goal achieved as a Director of Touring.
A.R.-Proudly, she spoke of her strategic role in setting up a new 45-million-pound Lottery Programme, which was to support work touring across England. Furthermore, it was to get work out of major cities in order to give people the opportunity of enjoying the arts wherever they lived in the country. This programme “was a real success and had a real impact on people.”

B.N.-In conclusion, she talked about Cause4, the social enterprise she is leading, and its Entrepreneurship Programme’s aim.
A.R.-In point of fact, she said, “Cause4 works across the third sector, which is the charity sector, arts is always included within that.” Our aim is really to help those organisations to grow through change because often they have to change their business model, the way they seek funding, in order to get more of that funding and it’s good to have someone else aside those organisation to help them to do that. In particular she said, arts organisations are mostly structured as charities but because they receive public subsidy, they don’t act as charities which means they don’t ask for money, “so we want to be very publicly visible as charity as worthy to receive money” which “is something that we strongly applicate.”

Overall, the interview was a great experience in which I learnt important things about the arts environment and how it is managed in England.